Anne Bonny was a famous corsair of Irish birth. She moved to the English Colonies in North America when she was ten years old, then to the pirate port of Nassau after marriage, and spent her adult life plundering the Spanish controlled waters of the Caribbean sea. As an infamous and most-wanted individual Bonny spent her life on the run. The coinage and goods she and other Caribbean pirates probably plundered include: Spanish doubloons, sugar, spices, cloth, food for eating, rum for drinking, and rigging and wood to mend their pirate ships. Doubloons from plundered booty were frequently cut to make change during pirate-harbor transactions in the Caribbean ports, resulting in the famous pieces-of-eight. 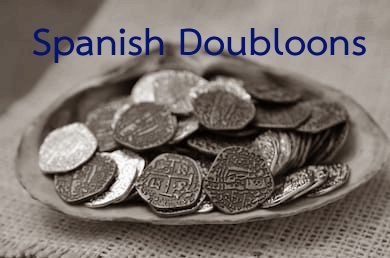 Anne Bonny is still infamous. A sketch of her personage served as motivation for Jewelry Bonney, a One Piece pirate character of exceptional hunger, bad manners, and ample common sense. Although high seas corsairs are glamorized today, at the most simplistic level, pirates are waterborne thieves who steal goods for personal profit. Perhaps the most interesting part of Anne Bonny’s story is the end. No one knows what happened to her. She claimed pregnancy and was spared the rope after being captured and tried, but that is where her trail grows cold. Conflicting reports say she escaped capture to resume piracy under a false name, was killed by the transport guards, died as a result of childbirth like her partner-in-crime Mary Reed, or was rescued by her father’s wealthy merchant associates. Perhaps it is the mystery that keeps us enthralled centuries after Anne Bonny’s mysterious disappearance.

Regardless a pirate’s past, their stolen treasures are continually discovered across the globe. Pieces-of-eight conjure a world of adventure, travel on the high seas, and shipwrecks galore. Watch for your piece of treasure, coming soon to pendantandring.com!